a bruisers guide to Bikram Yoga 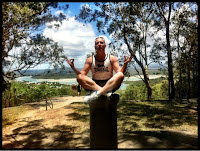 If a marketing team were developing a campaign for Bikram Yoga, I very much doubt that I would be the target demographic that they would build their message around.  That’s not to say that the Yoga industry don’t cater for people of my mould, more so that guys like me have our own prejudice towards ‘Yoga’ that cause us to dismiss it at the mere suggestion.

However, if I’m being completely honest and I put aside the bravado that often accompanies a ‘Yoga’ discussion, the truth of the matter is that the real reason I have avoided Yoga is simply because it’s unfamiliar to me.  It’s outside of my comfort zone. The fear of not being able to confidently perform a physical activity in a room full of people (maybe compounded by the room being in the majority women) causes me to avoid the idea in its entirety.

That is until now.

Background
Years of football and boxing, coupled with an indiscipline approach to stretching has led me to a point where finding the next level of my fitness journey is severely hindered by my lack of flexibility.  Whether it be the execution of certain boxing exercises or techniques, or the reoccurrence of injuries from old wars, the need to improve my flexibility in key areas is a problem that can no longer be ignored.  Worse, I am of the realisation that the problems I am experiencing today are only going to compound with age and that the lifestyle I have grown to love will come to a grinding halt if I don’t do something about it now.

By necessity, I need to do something drastic.

Bikram Yoga
For those (like me) who ignorantly thinks Yoga is nothing more than standing on one leg and making ‘Oooohhm’ noises, it is probably worth providing a quick insight into Bikram Yoga specifically:

Bikram’s Yoga is a series of 26 demanding postures and two breathing exercises that take place in a room heated to 40°C and 40% humidity. For 90 minutes, a series of posture will stretch and strengthen specific muscles, ligaments and joints stimulating the organs, glands and nerves to move fresh oxygenated blood to 100% of the body. The addition of heat will detoxify the body by opening pores in the skin to flush out toxins. In addition, the heat increases the heart rate for a better cardiovascular work-out, helps to improve strength by putting muscle tissue in its optimal state, and softens collagen around the joints for more freedom of movement.

For me, the addition of Heat allows another layer of complexity and challenge to the exercise, which is why I chose Bikram Yoga over more traditional Yoga classes.  I like to push my boundaries and felt that if I was going to do Yoga then I didn’t want it to be easy………….. unbeknown to me, I didn’t realise it was going to be as hard as it was!

Pre-Class
Putting aside years of procrastinating, last week I had a bit of a stiff neck.  A visit to the physio on Saturday reinforced the cause of the problem was a weakness in my middle back and treatment was heat and stretching.  The treatment was no surprise to me, in fact I have spent hundreds if not thousands of dollars over the last few years to receive the same comments………………. They say the definition of insanity is doing the same thing over and over again to try and get a different result. I walked out of that appointment knowing I had to do something different.

First step was to send my wife to a class as ‘reconnaissance’.  Needless to say, my wife was more than happy to grab some alone time so it took very little convincing for her to hand me the kids (5mths & 2yrs old) in exchange for her yoga mat.  So for the next 2hrs I felt the full force of parenthood while my wife enjoyed the peace and tranquillity of yoga.   So it was with some surprise when she returned with a look of anxiety in her eyes, she assured me that it was tough for her but at the same time she enjoyed it, however the cause of her anxienty soon became clear when she approached the subject of me doing it with a touch of trepidation.  It was clear, my wifes concern was not about her doing it……… but me doing it.

Throughout the evening I was faced with the ongoing internal debate of should I or shouldn’t I.  Without over thinking it, I set my alarm for 5.50am Sunday and went to sleep.  I’m unsure whether it was the 2litres of water I drank before bed or the fear of what was to come, either way I woke up about 4 times during the night, each time feeling a pang of fear.  Let’s put this in context, I regularly get punched in the face for Boxing, yet here I am restless over a few yoga poses.

I awoke at the allotted time, threw on some lycra (as well as a pair of shorts - a man must maintain some modesty) and was out the door before I could decide otherwise.

Within 20 minutes I had arrived at Bikram Yoga and I was greeted with the warmest of welcomes, which quickly put aside any preconceived ideas that someone of my look & build would not be welcomed.  In fact, the lady on the counter, upon hearing about my issues with flexibility, was quick to add that I was exactly the type of person who needed to be here.  Upon completing the mandatory forms and disclaimers, I was given the directions to the changing rooms and a quick snapshot of what to expect.

I stepped in to ‘Chamber 2’ with nothing more than a pair of shorts, a bottle of water and my towel/mat and was quickly faced with a dimly lit room with scented candles hanging in the air.  ‘This is nice’ I thought, reassured by the darkness of the room, confident that no one would see me struggle through the class.  I found a spot at the back, laid my mat and took five minutes to lie down and soak up the calm energy.

The Instructor arrived and the dynamic of the room changed immediately, lights were turned on, mirrors on all sides were exposed and the class had filled to 30 people including me and another male.  To say nerves were heightened was an understatement, however that was more than offset by the reassuring presence of the Instructor who happened to be the same lady who had greeted me at reception.

The Class
To be honest, there’s not much I can say about the poses performed in the class as it was somewhat of a blur.  Punctuated by sweat and suffering!

What I will say is that once the heat was lifted and the intensity was raised, it’s highly unlikely that anyone would notice what you are doing.  So if you are worried about people seeing you do the poses wrong, don’t be as they are probably too focused on what they are doing themselves.

My in-flexibility was quickly exposed during the class, however the instructor had a real knack of personalising the class so she was quickly on hand to give me direction whether that be modifying my movement or gauging my limitations.

Now I consider myself a relatively fit individual, however I will unashamedly admit that I was forced to take a seat at several stages of the class.  In fact, there were points where I had to dig deep and convince myself to even remain in the room.  The combination of heat, humidity and humiliation tested my character, however these were all overridden my one constant realisation………

…………. The fact that I wanted to quit was the very reason why I had to stay.

It was a natural reaction to my discomfort that I felt the 90minutes was too long, however the Instructor seemed in-tune with peoples tolerance as the tempo seemed to shift at the point when I was at my most vulnerable.

As said, it is difficult to recall the exact poses performed and/or their sequence.  However one that does stand out is when I was laying facedown on the floor, with my ear to the ground.  The reason this particular position is so significant in my memory probably has a lot to do with the fact that I could hear my heart pounding through the floorboards.

Be under no illusions, Bikram Yoga will test you mentally and physically.  Do not underestimate how difficult it will be.

However, the benefits are quickly realised, even within the first 24hours.

Post-Class
Let me reiterate, my objective for doing Bikram Yoga is for improved flexibility.  I am under no illusions that this requires long term commitment to the classes.

So it is with great surprise that I was able to experience immediate benefit following my first class.  So let me talk through my experiences within the first 24 hours:

Now I’m not sure if the above benefits are by chance or by design, they are simply my experiences in the first 24 hours.  Adding to that, I am yet to discover whether Bikram Yoga is the silver bullet to my flexibility problems, this can only be discovered long term.  However, what I do know is that I’m interested in seeing where this takes me.

They say the hardest part about doing something new is starting and that’s true with Bikram Yoga.  However, I won’t lie, it’s going to be hard convincing myself to endure that suffering again next week………… but as I say ‘true character is only discovered when you are at your weakest’.
Posted by digit at 23:07