Training was put on hold this week whilst I allowed a new addition on my skin to heal!

The design is inspired by my Scottish heritage and is drawn from traditional Pictish images found throughout the north of Scotland.  The Picts history is all but lost to us, but what we do know is that they were a proud and strong warrior culture.  This is evident by the Roman Empire being unable to conquer the Pictish lands......... despite them having done so throughout the rest of Europe.

The images I chose are interpreted as follows: 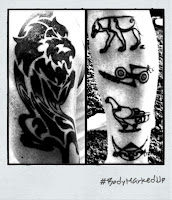 So that's the reason why I hit the pause button on training this week!